Ashita no REJENZU ・ Pretty Cure no Densetsu!
Pretty Cure no Densetsu! (プリキュアの伝説！, Purikyua no Densetsu!?), officially translated as "The Legend of Pretty Cure!", is a magical girl/boy anime (fan)series by toan (DENEBOON). The series' main motifs are Japanese mythology/folklore and Shintō religion, while its sub-motifs are clouds and the sky, as well as fruits and flowers. Its themes are supernatural occurrences, mystery, overcoming personal weakness or fear, the dangers of ignorance, and changing traditions.

A group of powerful Youkai who receive orders directly from Izanami, and control lesser Youkai. 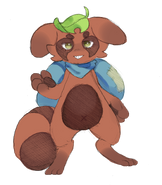