Outer space, change
Pretty Cure ad Astra is a fanseries written by Aresd57. It is about the conflict of change vs. stagnation, with an outer space motif. It can currently be read on AO3.

When a strange portal opens on the surface of the Moon and shadows begin coming out, the world is in danger. Two high-school girls are chosen as agents of change by a strange fairy from a far-flung world, and become the powerful Cure Comet and Cure Meteor! It will take their strength, unity, and belief in the ability to change for the better to combat the shadowy menace that threatens to leave the world to stagnate.

“The light of change that shines from here to the stars! Pretty Cure ad Astra!”
The two Pretty Cure that have been tasked by the fairy Antimony to protect and wield the “light of change” against the force of stagnation from the other world. Through promoting positive change and defeating the Endoline, their power grows stronger.
Members: Cure Comet and Cure Meteor
Group Attack: Starlight Synchrony Burst

Dawn Reimann / Cure Comet
“The light of change creating new possibilities! Cure Comet!”
Age: 17
Attacks: Comet Impact, Crystal Reflect, Cosmic Cannon
Colors: Blue and pink
An artist at heart (but not particularly focused in any area), she has lived in her hometown of Burmond her whole life. She really wants to be a good artist and loves to draw and craft, but is finding it difficult to improve her skills. She’s introverted and prefers to keep to herself most of the time, and only has a few close friends. However, she becomes fast friends with Riva after the latter moves into town, a friendship practically mandated by the two of them becoming Pretty Cure.
She has an inherent impulsiveness that leads to a lot of things. It serves as the driving force to try many different types of art, for one. She also ends up being the one in control of the situation a lot of the time because she acted first. Sometimes this means she’ll brush others off, but she never tries to be rude. When she’s not in control, she’s usually blindsided.

Riva Charny / Cure Meteor
“The light of change destroying old worries! Cure Meteor!”
Age: 16
Attacks: Meteor Impact, Meridiem Fireball, Molten Manifest
Colors: Red and gold
Somewhat shy but with an interest in academic success, she recently moved to Burmond from a nearby town. She is very polite, considerate, and respectful of boundaries, if only because she desires the same for herself. She is somewhat emotionally resilient, but when she breaks it really shows. Her decision to focus only on academics is quickly derailed by her new friend Dawn and their duties as Pretty Cure. If she takes on a task, she will see it through no matter what.
She’s not “the smart one,” and she takes things slower than most because of her perfectionist ideals, but she has the ability to analyze situations tactfully. That doesn’t keep her from unhealthy habits, though, like her social isolation. She also likes outer space, but it’s the physics side that appeals to her, which is why she doesn’t talk about it much.

Antimony / Annie
Antimony is a fairy from the strange world on the other side of the Moon wormhole. They pilot a silver craft with a vague humanoid shape, which they used to escape from the Endoline. Antimony doesn’t tell much about the world that they and the Endoline came from, rather they leave the responsibility of the fight to the Pretty Cure because they know they can’t take on the Endoline themselves.
Their craft allows them to assume the form of a human child sometimes, going by the name Annie. As Annie, she acts much more childish and a bit more theatrical, and she is more emotionally sensitive. She makes friends with Dawn’s younger sister Skylar. At first she doesn’t tell the Cures that she’s really Antimony, but she’s forced into action when the Cures get captured the first time. She treats the craft as her entire being.

Ellison Michelson
Dawn’s friend from the local high school. They’re more devoted to their art than Dawn is, but they have constant issues with intrusive thoughts. Their main issue is that they have lost faith in their ability to make good art, and without Dawn in the high school's art club to encourage them, it’s only been downhill.

Simone Torris
A sporty girl with a desire to succeed. She tries out for sports often, hoping to be one of those inspirational role models for disabled people, but she’s not a good team player. Her girlfriend Nasira is the soccer team’s captain, which may be the only reason she’s still on the team. She gets relegated to goalie often due to her inability to coordinate with the rest of the team.

Skylar Reimann
Dawn’s younger sister and resident bookworm. She is an intensely curious and eloquent young girl, but she talks so fast that some people have a hard time keeping up. She almost instantly becomes friends with Annie, but is oblivious to her true nature.

The Endoline are the evil force that opposes the Pretty Cure. Antimony stole the Star Gadgets from them and they pursued the fairy through a wormhole to Earth. The goal of their mission is to recover the Star Gadgets, apprehend Antimony, and return to their home, a world called Initek. They operate from the NSS Fornaxa, a massive spaceship orbiting the planet, often coming down to the surface with their Stogg troops and creating monsters called Entropists from people's bad memories.

Heetdoff
The admiral of the Endoline's space fleet. A large, imposing stone man who commands with brute force and is not to be questioned. He seeks challenge, but hates setbacks. He can be reasoned with by the other generals, however. As the mission takes longer, he gets steadily angrier. He always wears a dark military uniform over his rocky exterior.

Tairrapa
The captain of the Fornaxa, but her command has been deferred to Heetdoff for the purpose of the mission. She is very into fashion and pink stuff, and very friendly to her associates. She is proud of her skills to the point of being competitive with Heetdoff. She also loves (and loves to mess with) her crew of Stoggs. She believes she should still be in control and acts showy to compensate, and she requires special tools to summon Entropists. Of the three generals, she is the most likely to try and fight the Cures directly. She even has her own special attacks that she calls out.

Ordizon
A commander and mechanic working for the Endoline. He insists on them following a “minimal interference policy” which limits them to summoning Entropists or fighting directly in order to achieve their goals. His head is a black sphere being orbited by a smaller white sphere, both covered in LED displays.

Stoggs
The Endoline's foot soldiers, comprising the crew of the Fornaxa. Often, groups of them are beamed down to assist the generals. Inside them is the same shadowy essence found in the wormhole on the Moon. Some are capable of forming directly from that essence, but they are much weaker than the molded ones serving the Endoline.

Entropists
The monsters of the week. They are born when one of the generals looks into the memories of a civilian to give form to their most embarrassing moments or shameful failures. Their common physical traits are having dark green skin, horns on the side of their head, and a gray void where their face would be. Interacting with the void causes one to experience the memory that created the Entropist, and it comes with overwhelming emotions.

Dawn’s Family
Dawn's family consists of herself, her mom and dad, and her younger sister Skylar. Her dad is a stay-at-home dad and her mom works at the local observatory. Since her dad takes care of the house, he has a way of going about things he calls Reimann Reason (a pun on the phrase“rhyme and reason”).

Riva’s Family
Riva's family is just her and her two dads Mr. Charny (“dad”) and Mr. Escoto (”papa”) who love her very much. In fact, their doting is sometimes unbearable, so she'll go to her room to study alone or find an excuse to get out of the house. Her dads get along well with each other, with cute nicknames to boot, but Riva almost never sees any of that because she's always the center of attention when she's around. They have a veggie garden out back.

Soccer Team
The Sagitta Hill girls’ soccer team, which Simone is a part of. Other notable members include Nasira, team captain and Simone’s girlfriend, and Marcy, an intimidating teammate who hates Simone’s guts.

The Halloway Bros.
A pair of clowns, Xavier and Jasper, who run live shows to entertain kids. After the Endoline attacked their April Fools' Day show and made an Entropist from one of them, they started to reconsider their job.

Star Gadget
The transformation trinket. A round device a few inches in diameter with a star-shaped inset. It activates to the words “Pretty Cure, change my form!” When a Cure is transformed, the trinket is affixed to the outfit just above the bust. It only allows a Cure to stay transformed for a period of time, varying depending on how much energy is used in attacks and such. The limit is very generous, but using a finisher will deplete most of it. It also has an experience tracker and unlocks new abilities for the Cures as they continue to win. The heart-shaped button on the face provides a bunch of different functions such as storing inventory.

Dynamic Rod
A power-amplifying wand for each Cure. It shoots elemental beams and can morph into a Cure-specific Dynamic Weapon. Comet and Meteor first get theirs when facing off against a giant tank mecha piloted by Heetdoff, and this lets them use Starlight Synchrony Burst.

Burmond
Dawn’s hometown. The neighborhood that she and Riva live in is a short walk away from the center of town. Landmarks include the Burmond Observatory & Science Station, where Dawn’s mom works, located on top of a large hill past the suburbs; and Sagitta Hill High School, the school that Dawn and Riva attend. There’s also a downtown area with large office buildings, and a rocky hill area where the Cures battle Heetdoff’s mech. Later that area is riddled with the mech’s wreckage.

NSS Fornaxa
The Endoline ship orbiting Earth. It consists of a curved ring connected by a pillar to a large, oval-like core. The core looks like someone cut it like a vegetable and then haphazardly reassembled the slices. The ring is just large enough for the core to fit through. It can project a shield around itself and is equipped with numerous laser cannons and hangar bays on its exterior. The bent ring is the insignia of the crew.

The Moon
Earth's Moon. A wormhole appeared on its surface one night, spewing out a shadowy mass. Only individuals who are sensitive to the "light of change" can see this shadowy mass. Antimony and the Endoline came to Earth through this wormhole. 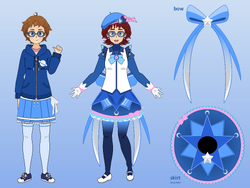 Cure Comet's 2021 ref, made with kisekae 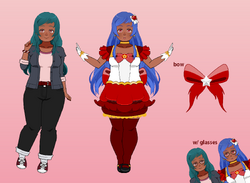 Cure Meteor's 2021 ref, made with kisekae
Community content is available under CC-BY-SA unless otherwise noted.
Advertisement