Memoria Pretty Cure
PikaPika Tropica Pretty Cure! (ぴかぴかトロピカプリキュア！, Pikapika Toropika Purikyua!?) is a magical girl anime (fan)series directed, written, and designed by Kyo Asano (DENEBOON). The series’ motifs are tropical weather, paradise and tropical fruits/flowers, while some recurring themes are the idea of accepting what you can't change, chaos and order, companionship as salvation, hope/wishes and the beauty of nature.

Summer has finally come to an end for 15 year-old Sumomo Aikawa. Her first year of high school is fast approaching, and on the tiny Iihi Archipelago in the centre of the Pacific Ocean, Sumomo's first concern is not necessarily starting a new school year, but beating the tropical heat with much less freedom. On the dusk of her final day, she spends her time all alone at an amusement park, where she wins what she believes to be a stuffed rodent at a claw machine. It's later that night that she realizes he's no stuffed toy, and actually the fairy Acero from the land of Elysium. The realm has been destroyed by a group wishing to bring a dark future to the universe, Havoc Dystopia, and Elysium ruler Belhalla has been locked away in a magical box. What's more is Sumomo's beloved planet Earth is their next target. Acero reveals that he's on a mission to revive the "Elysian Warriors", the Pretty Cure, and offers a device called a Shiny Bell to the young girl as a way to request her help. Despite her initial doubts and limited understanding of the creature's story, sure enough Sumomo and Acero are attacked the next day by a member of Havoc Dystopia named Enmy. In order to curb the destruction caused by Enmy's Kulo'he monster, Sumomo becomes the guardian of the wind and sky, Cure Flurry, and begins a new unexpected journey to stop the Ultimate Doomsday from transpiring. 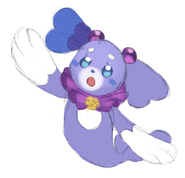 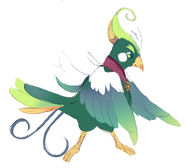 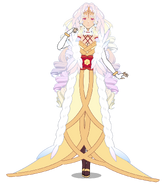 Concept art of various items seen in the series